We open our doors from 19.00h till late, Wednesday to Sunday. Due to limited capacity, reservations are highly recommended.

Find our secret door and dive into old Chinese ages at THE EMPEROR’S SECRET.

The secret establishment built during the reign of young Emperor Jing Li, who sought a safe haven away from the unscrupulous influence of his aunt, Zhang Xiu. After being sentenced to death by his notorious aunt, no one has ever heard or known anything about this hidden place ever since.

Being well versed in Chinese culture, Aurel Huber, Founder and General Manager of “The Emperor’s Secret”, set up his version of the Forbidden City of China, aiming to invite guests to experience and unveil the secret ancient vault of Chinese dynasty.

Our Signature Cocktails and Chinese Tapas have a connection to this old and vast culture. Have a sip and a bite to explore new senses of taste. 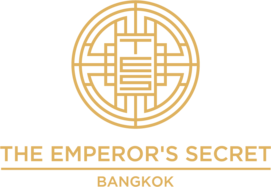 THE EMPEROR’S SECRET is from our owner, Aurel, a passionate project he wanted to realize in Southeast Asia’s ‘capital city of nightlife’ – Bangkok!

As a well-travelled person on the Asian continent (also lived in Kobe, Hong Kong and Beijing), the understandsthe culture and mentality and fell in love with Asia. This was the main purpose to start with THE EMPEROR’S SECRET and deliver the crowd of Bangkok’s nightlife a new unique spot!